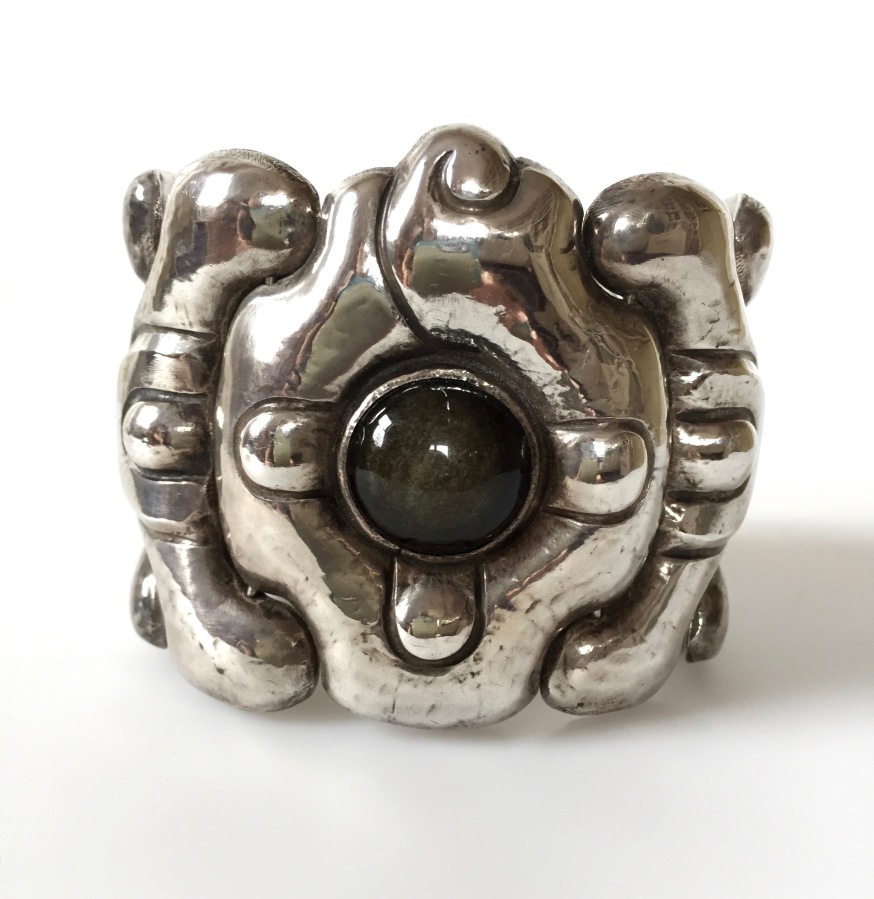 This is a photo of a bracelet, one with more presence, and more mojo, than any piece of jewelry I’ve ever seen, let alone owned. It arrived just after Christmas 2015, having taken its sweet time getting to me. I bought it from my dealer friend Kathi Jo (see my last post), who’d sold it to another client years before…and this client, who was in Europe, had just sold it back to Kathi Jo so she could buy other pieces from her. How she could bring herself to part with it, I can’t imagine. It’s rare, and I half suspect it’s alive. It is, in fact, a stylized image of a moth, taken from Mexican folk art, and it dates from the ’30s.

Its designer, Matilde Eugenia Poulat, was not the first to use this moth motif, but she brought enormous style and verve to it, making it look both ancient and modern. Poulat, who signed her pieces ‘Matl’ (a variant of the Aztec word for water), studied painting in Mexico City alongside Diego Rivera before turning her hand to silver. Rivera’s wife, the painter Frida Kahlo, wore Matl; and like Kahlo, Poulat incorporated Mexican folk art motifs into her work. She also found inspiration in ancient Mixtec and Zapotec jewelry.

The Moth is not a bracelet I would ever have thought I wanted. But early last fall, I saw one for sale online—narrower than mine, with a turquoise stone—and it crept into my head and stayed there. I circled it, moth-to-flame-wise. I bought it. Then, without a word of explanation, the seller canceled the sale and returned my payment. At which point I went quietly mad. I emailed Kathi Jo, who knew the piece. (Of course she knew the piece. I think she knows every piece of Mexican silver jewelry ever offered by anyone.) She couldn’t say why the seller was holding onto it…but she could sell me this one, which her client was about to return. The stone is obsidian—volcanic glass, translucent black, formed from rapidly cooling lava. Powerful stuff.

Massive as the Matl Moth bracelet appears, it’s not heavy, because it isn’t solid cast silver, but hollow—a technique called repoussé or repoussage, where a sheet of metal is hammered from the reverse side to create a raised design. Repoussage is one of the glories of Mexican silversmithing, and most of it was done by hand. A piece like this one, which is both pushed out from the back and decorated (or chased) on the front, would most likely have been worked in a bowl full of brea, or pitch, which was soft enough to allow the metal to be shaped, but firm enough to support the hammering.

Every silver studio (or platero) made its own tools and formulated its own pitch. The silversmiths competed with each other, and inspired each other. I can spend hours looking at Mexican silver online, but the pieces are even better when you hold them. They contain all the exuberance of artists trying to top one another—and of a culture finding its own voice.

Repoussage gives the silver fluidity and depth. Some is is open backed, but most is finished in back with a sheet of silver—incredibly exacting work.