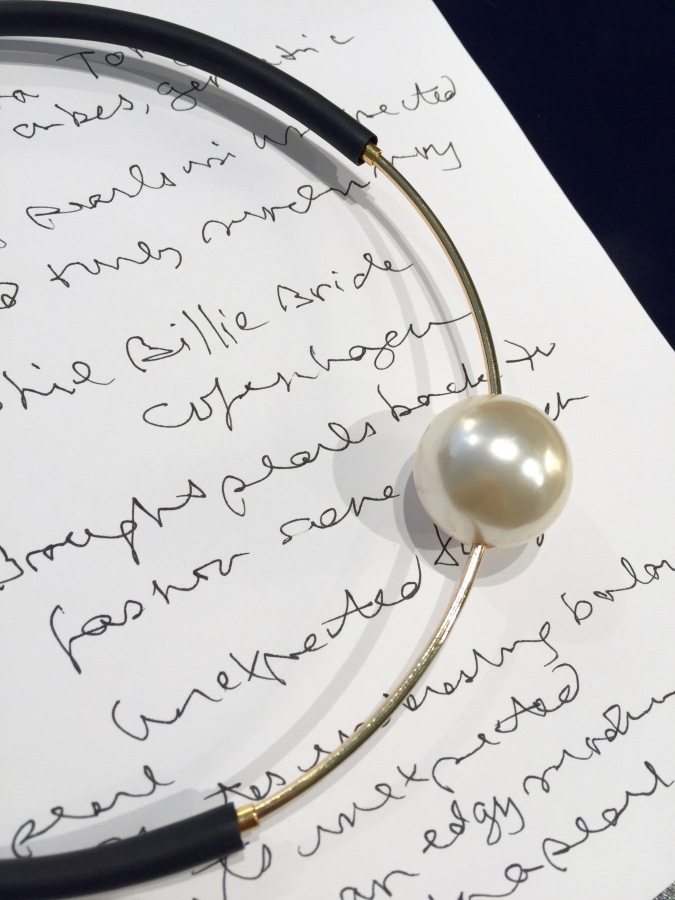 The e-mail’s subject line was: “Do you love pearls?” The sender, D., a magazine crony of mine from way back, wanted to know if I’d be interested in writing a story about pearls for the Wall Street Journal’s Style section. (Yes, the business paper of record has a Style section.) I was not—am not—looking for freelance writing assignments. But I like and respect D., who is both literary and smart about fashion. And of course I do love pearls. So I thought: Why not?

The angle, D. told me, was that jewelry designers are moving away from classic pearl looks—the simple strand and demure studs we’ve all inherited from our mothers. This isn’t exactly news; it’s been going on for some time. But I didn’t argue the point. When you write a style story for a major media outlet, they tell you the angle, they tell you what they’re going to shoot, and they tell you who to interview. You, the writer, are basically a content provider. And the per-word pay is exactly what it was 25 years ago. I signed on anyhow, because they were paying me to look at jewelry.

The editors sent me to a new jewelry boutique called Quiet Storms in Williamsburg, Brooklyn. Its owner, Reshma Patel, decided to focus on modern design because it’s something the neighborhood had lacked. She features serious designers whose work I hadn’t seen before, like the aggressively whimsical earrings and rings above, by the Italian designer Delfina Delettrez. The earrings in the photo are all sold as singles, because…well, because more than one might be too much of a statement. And because women now want to be able to curate their own ears. Curate: that’s the word Reshma used, and it’s actually a thing. Her customers—aged 20s through 60s—have multiple ear piercings, the better to showcase multiple earrings.

I am neither an ear curator nor a modernist, so at this point, I was feeling safe from the urge to spend. But I was oddly beguiled by a pearl ring from the Italian designer Lia DiGregorio, with the pearl on the inside. It seemed somehow perverse: if you’re going to set a single perfect pearl, don’t you want it to show?

I slipped it on. It was my size. And despite its ungainly appearance, it turned out to be perfectly comfortable and perfectly balanced. It didn’t flop about on the finger. The pearl was obliquely visible, like a rabbit in a hutch, and it felt delicious.

I didn’t buy it, but I didn’t take it off either. I was learning something significant about pearls: when they’re used in an edgy or avant-garde design, they add something familiar and comforting. They make modernism safe. Reshma showed me a minimalist earring like an opened paper clip by the Los Angeles based designer Gabriela Artigas. It had a tiny pearl at one end. I thought, I could wear this. It’s sold as a single. So I bought two.

And with that, I had spent two thirds of what the Wall Street Journal was going to pay me for the pearl story. Nor was I finished. The collar below and at the top of this post, in gold-plated brass and black rubber with a big faux pearl, was exactly the gift for a close friend who had something to celebrate.

(She loved it.) By now I had pretty much spent my fee for the story, and I still had reporting to do. I interviewed a number of designers by e-mail (this sort of reporting is much easier than it was 25 years ago). Then I sat down with a bona fide pearl expert—my designer friend Nan Irwin. Nan has been gazing into pearls for decades, and she knows what makes the good ones good. She’s sold me more than one of those classic strands that are supposed to have gone out of style: freshwater pearls, Akoya pearls, Tahitians. You can bet I’ll be posting about them at some point.

We sat at the bar at our favorite neighborhood bistro. She had a glass of rosé diluted with ice; I sipped Carpano Antica, likewise diluted. My outlook grew pleasantly blurred, perfect for asking Nan how the average newspaper reader is supposed to look at a pearl. It’s not exactly simple. Pearls are graded for their shape, their luster, and the cleanness of their surface. Luster is the signal quality, the glow pearl-lovers fall for. By some grading scales, a mirror-shiny surface is most desirable: more luster means a pearl has more nacre, the crystalline substance secreted by mollusks over time. But, said Nan, a pearl does not have to be shiny to have that deep, mysterious glow. “I’ve been working at this for how many years and I’m still trying to synthesize what makes a pearl spectacular,” she said. “When that allure shines through, you see it and just go, Damn.”

The next day I e-mailed Reshma and ordered the Lia DiGregorio ring.

2 thoughts on “The Pearl Story”