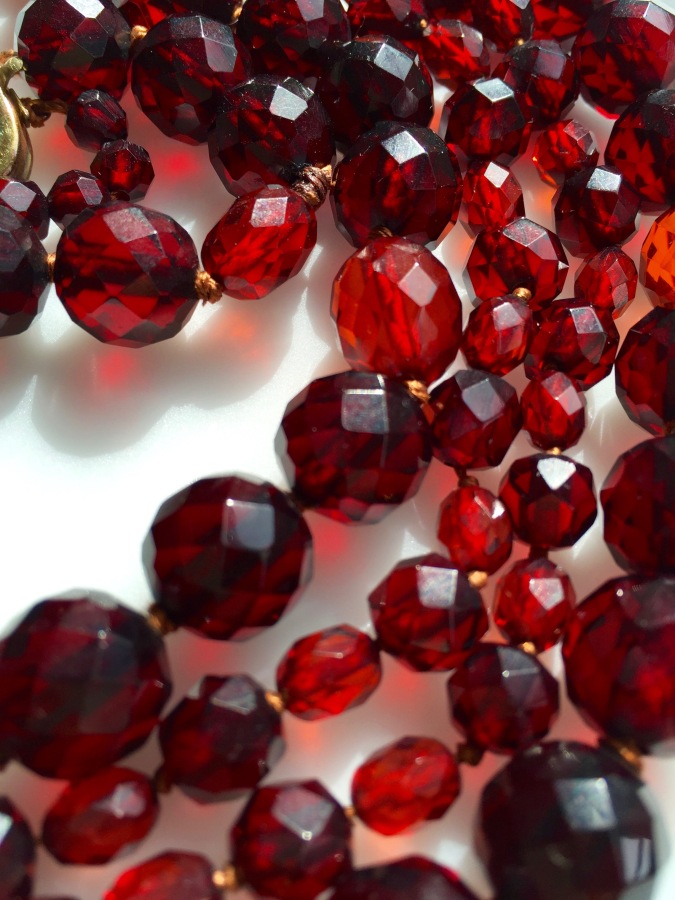 I was ten. Not even. My mother had unearthed from somewhere a strand of reddish faceted beads with a broken clasp. They were translucent and lightweight and sparkled in all directions. They were the prettiest things I’d ever seen. I asked what they were. “Ambabeads,” said my mother. They belonged to her sister Leanore and needed repair. Mother seemed to wish she could keep them.

Ambabeads were something she remembered from girlhood, and remembering seemed to soften her. She’d had a strand of her own once—in the Thirties, probably—and wondered what had happened to them. But when I asked her about Ambabeads a few days later, she didn’t know what I was talking about, because of course she’d been saying “amber beads.”

This was my first encounter with amber jewelry, which I pursued for decades afterward. I now have a strand like my mother’s, pictured above, and I adore it, but I’m not at all sure it’s really amber. A lot of vintage beads sold as amber are actually a cast phenolic resin called bakelite—closely related to, but not the same as, the Bakelite in those vintage bangles that sell for a fortune. How can I tell what my Ambabeads are made of? There are tests: You can make a probe of fine copper wire, heat it till it’s red hot, and touch it to a bead. Real amber will release a tiny puff of smoke and a trace of pine scent, if you’re lucky enough to catch it. Or you can test for bakelite with acetone, and quite possibly ruin the bead. I’m not about to do either of these things.

Rather, I’ll ask a larger question: What, exactly, is amber?

It’s an organic gem, like coral, ivory or jet. It’s also a polymer, like bakelite. Specifically, it’s polymerized resin from ancient pine trees, and I mean ancient: the polymerization process takes at least two million years. Baltic amber is 35 million years old. The resin had to find its way into the bed of a swamp or other wet environment and stay there under pressure for all that time. If the process was interrupted, a not-fully-polymerized amber called copal was formed. Copal, too, is made into beads and sold as amber, though it’s only tens of thousands of years old and has a different texture. If you rub certain kinds of copal briskly with a dry cloth, they’ll become tacky from the heat. Amber won’t.

Pictured above, my African amber trade beads. They’re old, and they’re not natural amber but a mixed bag of resins. Some of them may be phenolic resins made a century ago in Europe and carved in Africa. Some may be African copal. Some may be a blend of natural and manmade resins. I’ve had these beads a long time and love to handle them. But they’re quite large and I’m not Bohemian enough to wear them.

The photo above shows a polished hunk of raw amber, either Dominican or Mexican. (The Baltic countries and the Dominican Republic are the two major suppliers of amber.) It’s as smooth as smooth gets, and weighs practically nothing. It’s also full of inclusions: plant matter and whatever else got trapped inside the resin.

Here’s something rarer: a blob of clear resin that got polymerized where it sat. The front is smooth, and the back bears the impression of whatever it sat on. Here I have to apologize once more to my pal Iris, who was with me at the mineral show where I bought it and wanted it as badly as I did.

It would be logical to think that amber beads are cut from larger pieces of raw amber. But they aren’t. The only raw amber beads are made from tiny pieces called chips that get tumble-polished and drilled. These have been used for centuries as teething necklaces for babies—to wear, not to chew on. The succinic acid in amber is said to have analgesic properties.

Other than these, just about all the amber beads in jewelry are made of reconstructed amber: pieces melted together under high pressure and pressed into molds, or formed into blocks which are then cut and shaped. This is considered genuine amber but not natural amber, according to the Poland Import Export Chamber of Commerce—and they should know, since Poland is a huge amber exporter. Their website says, “Most people do not know what they are buying. And many jewelers do not know what they are selling.” A massive understatement.

The heating and reconstructing process allows amber processors to make uniformly shaped beads, including those with faceted surfaces. It also lets them create colors, like red, that are rare in nature. Just about all ‘cherry’ amber has been heat-treated, and this has been done, like, forever. The Romans were enhancing amber by boiling it in pig fat 2,000 years ago.

This answers some large questions for me. I’ve long wondered about the amber in Chinese figurines like the one above from the 19th century. I see now that they’re made from pressed reconstructed amber. And this really is considered amber—just not raw, natural amber.

And the necklace above, which my husband bought in an upscale jewelry store in Warsaw, is top-quality Baltic amber—the real, reconstructed thing.

What about my mother’s Ambabeads? Probably bakelite. But it’s all polymerized resin to me now, and I’m going to stop worrying whether it’s ‘real’ and just keep loving what I own. Here’s a photo gallery.

Polished amber beads, most likely raw because they’re all different and kind of funky. 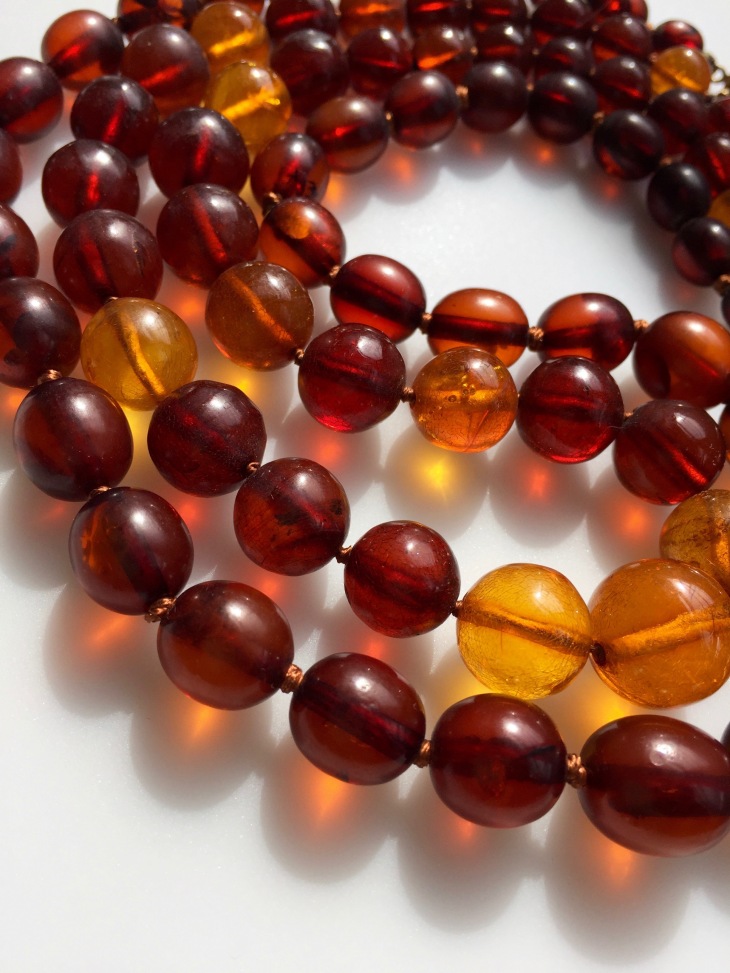 Antique amber beads, which I used to think were natural—but gee, look how uniform they are! Reconstructed, then. 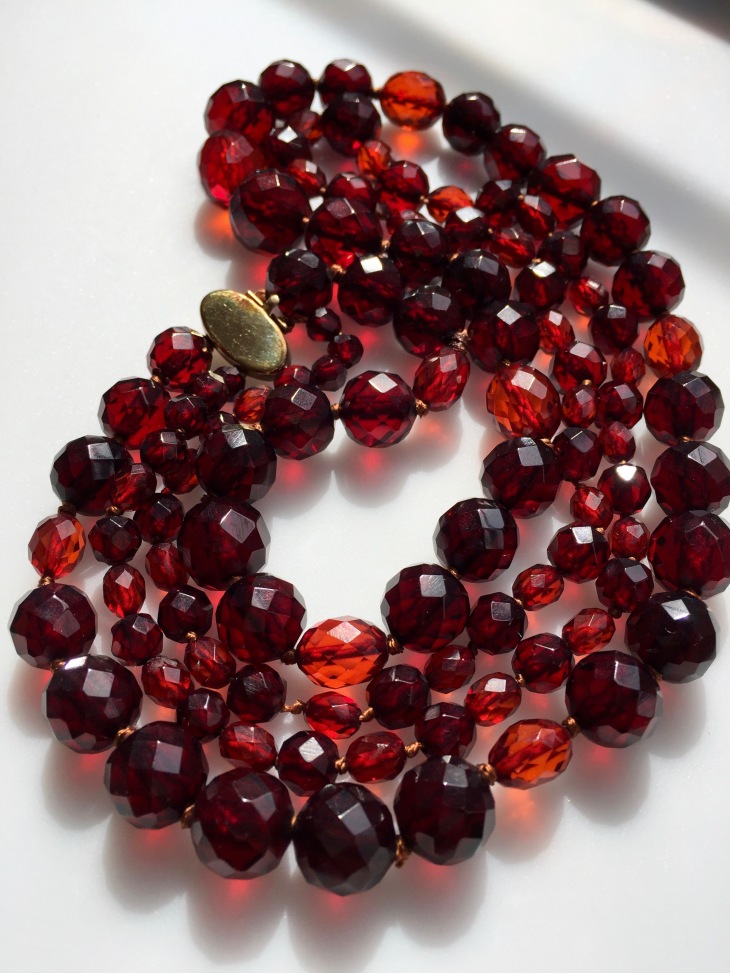 Old cherry amber: two antique necklaces restrung as one. I can’t tell you whether this is 20th century bakelite or Victorian reconstructed amber—and I don’t care.