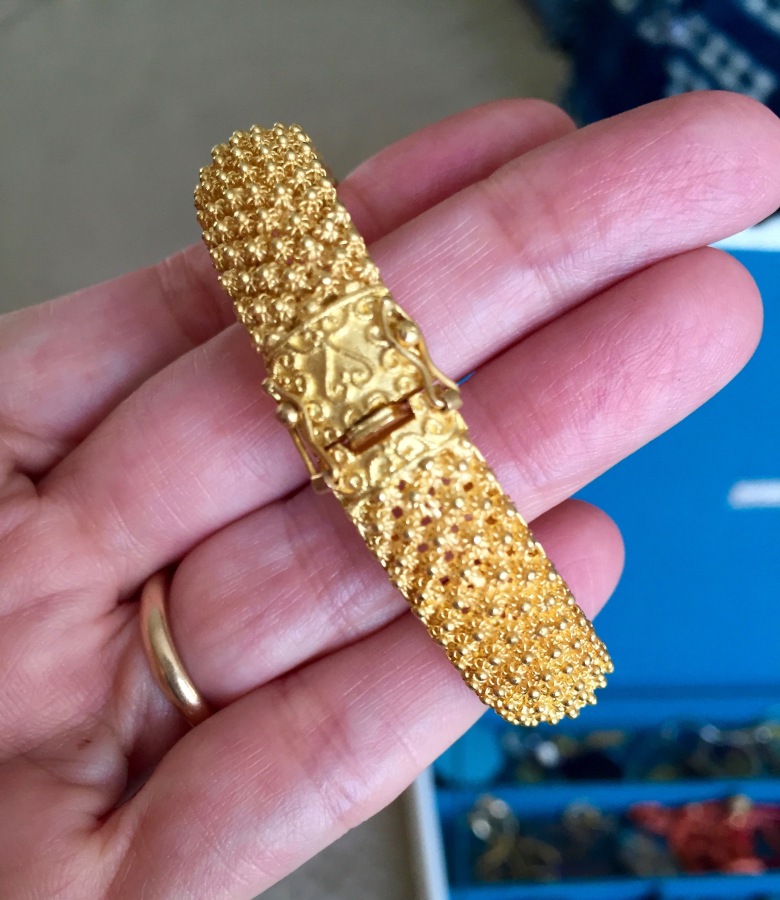 Buying jewelry is like buying a car: the minute you drive it home, it’s worth substantially less than what you just paid for it. If you go to sell it, you will not get all your money back, or even most of your money back. You’ll get whatever pittance the market offers you.

I’ve bought many a piece of jewelry described by its eager seller as ‘an investment.’ Gentle reader, investment jewelry is not bought by the likes of us. An investment grade diamond, for example, is large—at least one carat—D color (the whitest on the diamond grading scale), and internally flawless, with an ideal cut. And it comes with a certificate from a gem lab, preferably GIA, attesting to all this.

My engagement diamond, at right, is quite a good stone. (You’ve seen it.) It’s just over a carat, H color, not quite flawless, beautifully cut. But an investment grade stone of the same size would cost three times more at today’s prices. And a 2-carat investment grade stone would cost many times more—over $50,000. The only reason this matters is that if I ever need to sell my special stone, it will fetch a humdrum price.

What started me on this is that I recently made a significant jewelry purchase—nowhere near that hypothetical 2-carat diamond, but significant enough to trip a circuit breaker in my brain. Not only did it make me want to stop buying jewelry, it made me want to sell some of the pieces I wantonly acquired over the years but no longer wear. ‘Enough! or Too much’, I said, quoting William Blake, who also said, ‘The road of excess leads to the palace of wisdom.’

My wisdom is that most of the jewelry I bought for love will be very hard to sell for money. Jewelry has two kinds of value: intrinsic and extrinsic. The intrinsic value is the market price of the materials: the gold, silver, or platinum; the precious or semiprecious stones. The extrinsic value lies entirely in what buyers are willing to pay for what you’re selling, assuming you can connect with a buyer. Artistry counts for a lot less than you’d think, though a signature from a collectible designer can be worth a lot.

Markets are fishy things. A diamond with an old-fashioned cut used to be valued in terms of what it would weigh if it were recut along modern lines. But there’s a market for antique cuts now. Gold-colored South Sea pearls have gotten quite expensive thanks to high demand in China. And the price of some precious stones has gone up because they’ve become scarcer. (Deep pink tourmaline is one such.)

And then there’s gold, the form of jewelry most easily turned into cash. I bought the bracelet above more than twenty years ago, before the price of gold went through the roof. It’s exquisitely worked 22-karat gold—or rather, it was. The bangle is no more. I had my jeweler bring it to her smelter, where it netted about twice what I paid for it. (I couldn’t have made this transaction myself. Smelters deal only with jewelers, not with the general public. Both will charge you for this service.)

Art defeated commerce in the case of the necklace at left, which also went to the smelter. My jeweler was about to hand it over when another jeweler spotted it and bought it from her, paying slightly more than the smelter would have. No matter how beautiful it is, gold jewelry is all about cash.

It was Alexander Hamilton who, in 1792, first tied the U.S. dollar to the price of gold, establishing a rate just shy of $20 per ounce. This price held until the Great Depression, when people began hoarding gold. In 1933, Franklin D. Roosevelt signed legislation making it a lot harder for private citizens to own gold bars or coins. He fixed the price of gold at $35 an ounce, a rate that held for decades. (Read more about this here.)

In the 1960s, when I was a kid, I bought 14K gold chains at Woolworth’s, where I could smell the pet-shop hamsters in their cedar nests. The chains were packaged in cellophane and hung on racks like greeting cards. But in the early 70s, gold became a commodity again, and citizens were allowed to buy and sell it. You know the rest: times get rocky, people get panicky, and the price of gold goes up and up. In 2012, it was over $1600 an ounce. These days it’s hovering at around $1100. Which means that my jeweler friends, who have to buy gold to execute their designs, are really struggling. A lot of them are working in silver now.

By the way: the price of platinum today is much lower than the price of gold. This isn’t right, considering how much rarer platinum is. But gold is what people reach for when times get scary.

In my current status as a non-buyer of jewelry, I’ve gotten into the habit of watching the Gem Shopping Network late at night. (Jewelry shows have to be watched at night. They’re surreal, and the late hour makes them even more so.) This network hawks fancy jewelry at bargain prices. The sapphire ring above, for instance, could sell for much more than the TV asking price, but the network clearly picked it up for a song, as it did every piece on the turntable below. Someone created these pieces, and sold them with great fanfare at a huge markup. But in the real jewelry world, they’re worth no more than the sum of their sparkly parts.

It’s a strange thing: when jewelry becomes a commodity, it loses its magic. As I watch the TV gems go by, I don’t have the slightest urge to pick up the phone and shop.

4 thoughts on “Love For Sale”