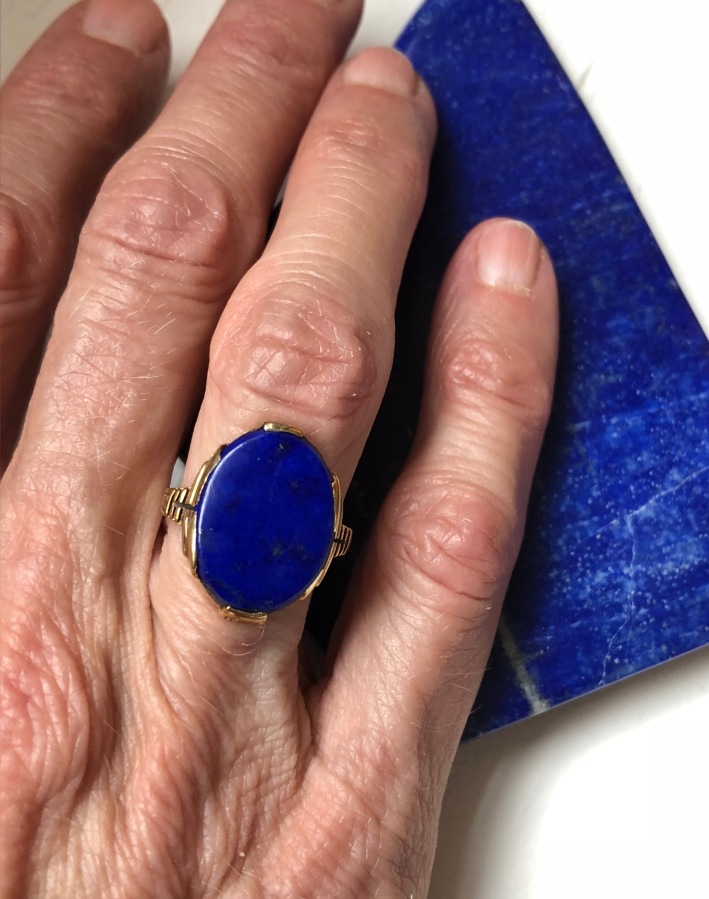 In the 1970s, when I was in my twenties, I belonged to a spiritual community that, on balance, did me a lot of good. My boss was convinced it was a cult, and when 900 members of the Peoples Temple drank cyanide-laced Kool-Aid in Jonestown, Guyana, he begged me to leave my community before something similar happened to me. But it wasn’t a cult. We drank herbal tea, not Kool-Aid. This being the 70s, though, we did talk about the New Age a lot. We meditated. We let our feelings out. We attuned ourselves to the vibrations of plants and animals . . . and rocks.

One weekend at a retreat in the Catskills, a senior member of the community walked into the lunch room wearing a choker-length necklace with a small pendant, a blue stone bezeled in gold. I’d never seen such a brilliant blue. ‘What is that?’, I yelped. ‘It’s lapis,’ she said, and went on to explain that lapis was a powerful protective stone that encouraged the emergence of one’s inner truth. Among her enlightened cohort, it was the spiritual stone du jour. I lusted for it at once.

Rather than trying to describe the blue of very fine lapis, I’ll show you:

Either this color sends you or it doesn’t. It certainly sends me. To my eye, it positively sings with energy. Which is why I was willing to believe that lapis was a magic stone, though I generally don’t rely on stones or crystals to provide magic.

Lapis lazuli, which I also wrote about here, has been prized for thousands of years. The ancient Egyptians used it a lot—in the eyes and eyebrows of King Tut’s funerary mask, for example. Then as now, the best and brightest lapis was mined in Afghanistan, though there are also important deposits in Russia and Chile. Afghani lapis used to be ground into powder to create ultramarine blue, the costly pigment used by Italian Renaissance painters. (A synthetic version, brighter and cheaper, was invented in 1826.)

Lapis is a hodgepodge of a rock, and not all of it is gorgeous. The intense blue I love comes from a mineral called lazurite. There may also be pyrite, which looks like streaks or flecks of gold. But lapis may also contain sodalite (a darker blue), calcite (white), and a whole bunch of other minerals. It comes in many grades and shades. 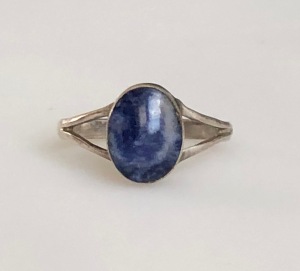 When I first lusted after lapis, I couldn’t afford a gold pendant with a top-quality stone. But I found a tiny silver ring, left, in a head shop across town. It cost $19, which was a stretch for me at the time. It’s probably lapis, but that dark blue streaked with white looks more like sodalite and calcite to me. It doesn’t give me that magic feeling.

Neither does the lapis necklace below, which my husband bought some years later from a gallery that sells ancient artifacts. The beads were carved thousands of years ago—I don’t doubt this—and it’s nice to own a piece of history. But apparently it’s not history I’m after. It’s that brilliant blue. 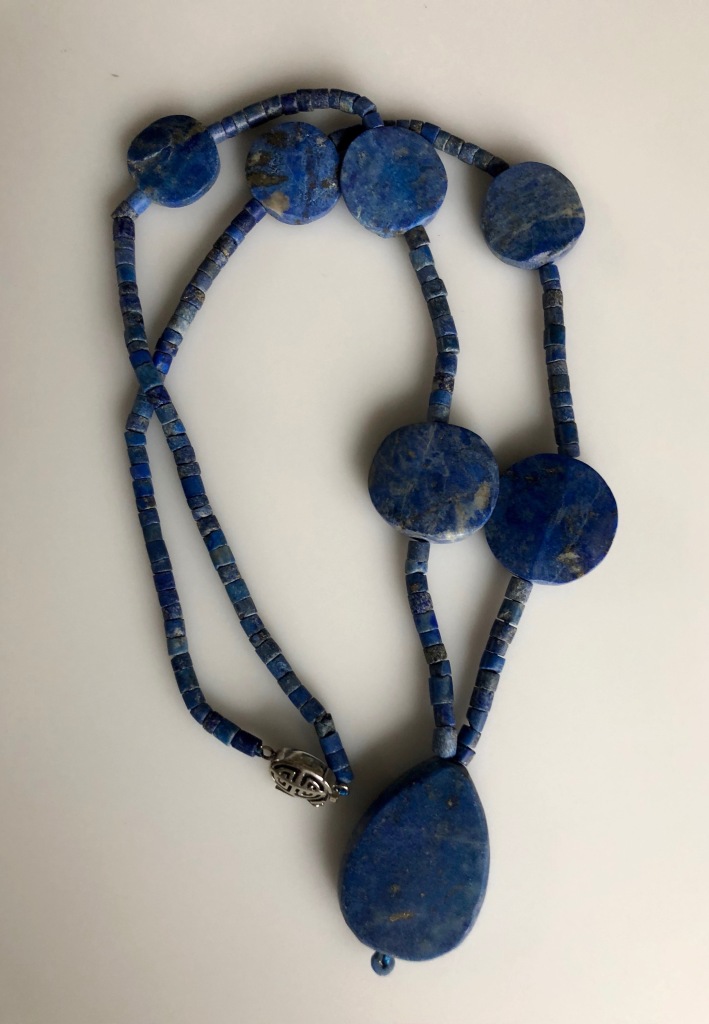 I was maybe forty when I finally found a lapis ring I could gaze into, below and at the top of this post. It wasn’t particularly expensive for the middle-aged me. And it was my favorite kind of lapis, with tiny flecks of pyrite.

The Art Deco setting in 14 karat gold tells me it’s probably American, from the 30s or 40s. It is by no means a fancy ring; it’s an inexpensive stone plunked into a lightweight setting. But the color makes me feel like royalty.

A few years later, an estate dealer sold me a bracelet with four lapis stones virtually identical to the one in the ring. It’s hard to see in the photo below, but the square-knot links are executed in two colors of 14 karat gold, rose and yellow.

You’d think a bracelet like this would be enough for anyone. But after a particularly stressful day a few years ago, I came home with the number below. The barrel-shaped beads are faceted. Nothing sparkles quite like faceted lapis.

These beads have a lot of sparkly pyrite in them, and I like they way they look with gold. Lapis pairs well with silver, too, but it’s a completely different aesthetic. In the heavy silver ring at right, made by the ever amazing Michele Berman, the blue looks cooler and somehow sportier.

Some of my favorite pieces of lapis, below, aren’t set in jewelry, and I confess I like them just as well as my rings and bracelets. It turns out that I don’t necessarily need to wear this stone—I just want to commune with it. Which means that, jaded as I am, I’m still a New Age child at heart. I still think lapis lazuli is magic. 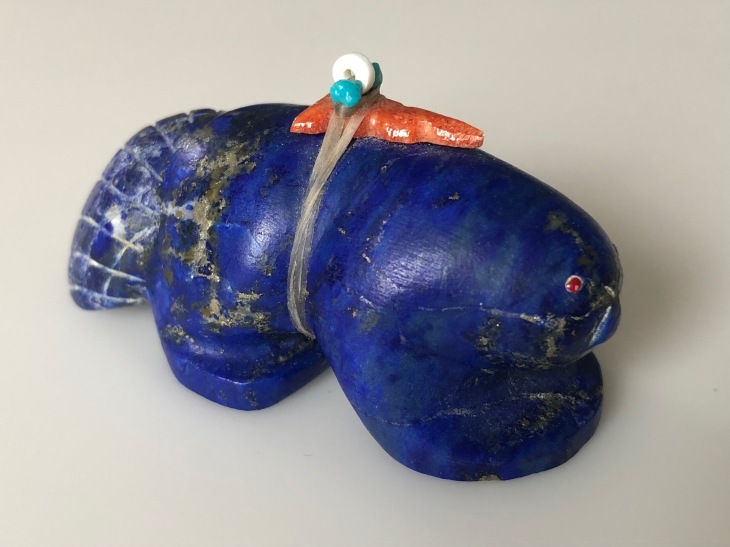 Above, a Native American fetish of a beaver in lapis, coral and turquoise, carved by Zuni artist Brion Hattie. Beavers are diligent, energetic and cooperative—qualities I could use. From Keshi in Santa Fe, NM. Here’s a link to their website. 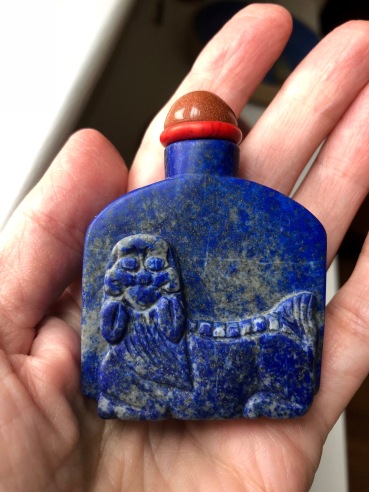 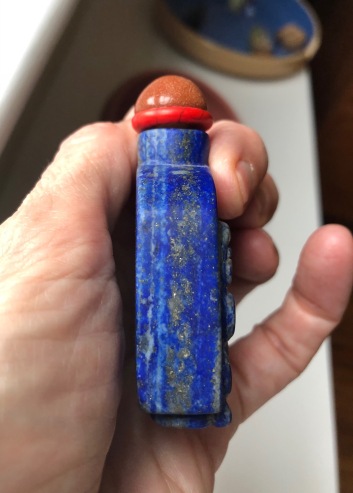 Above, Chinese carved lapis snuff bottle with a guardian lion on the front. (Americans tend to call them Foo dogs, but they’re not dogs at all.) I particularly love the pyrite vein running up the sides. Purchased from Tradewinds Antiques on Ruby Lane. 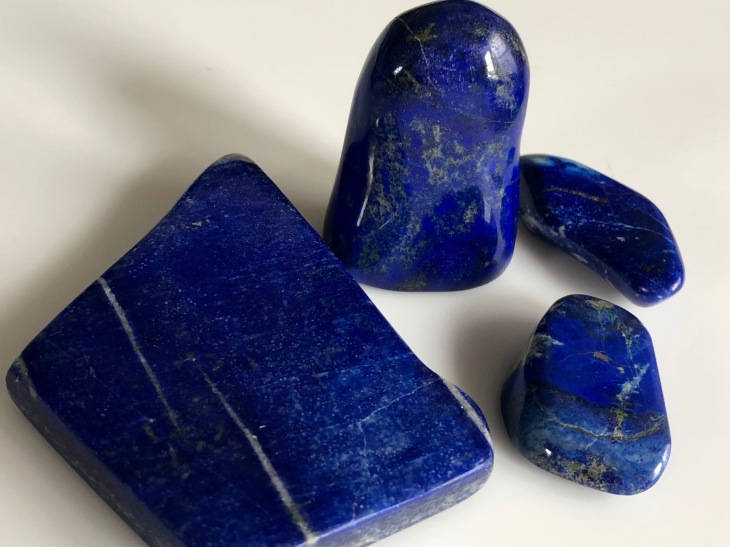 Above, sundry pieces of polished lapis purchased over the years. They’re not expensive. I keep them all over the house.

6 thoughts on “Singing the Blues”