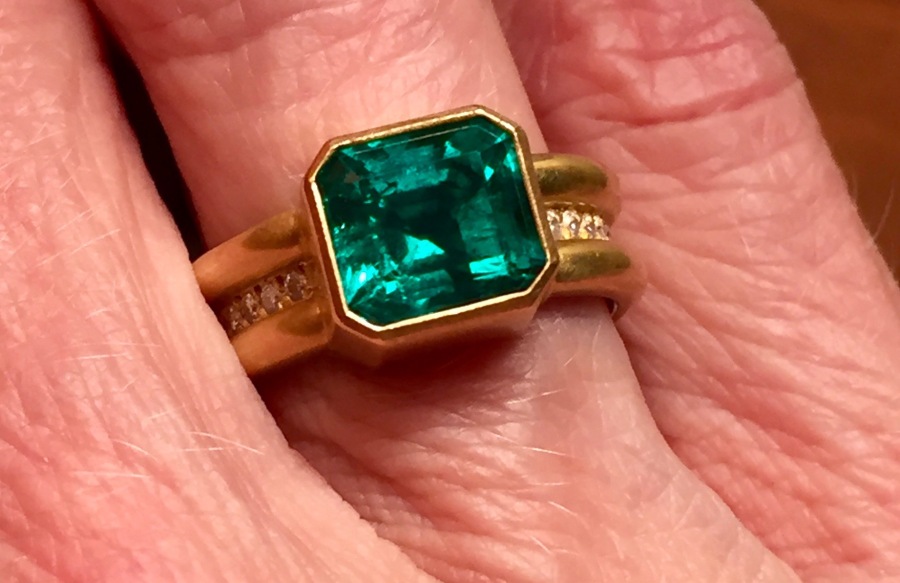 At least twenty years ago, my friend Kathryn received an engagement ring that opened my eyes to emeralds. It was Victorian (if I remember correctly) and had five grass-green stones. It looked something like the ring below, currently for sale on Etsy.

I hadn’t thought much about emeralds till then. But Kathryn’s were such a bewitching green that I could see why she preferred them to diamonds. The dealer who sold her the ring told her something I’ve never forgotten: that good emeralds are alive. There are a lot of dull emeralds out there, he said, but the best ones have a radiance and depth of color: they speak to you.

Kathryn’s emeralds would doubtless still be speaking to her, but the ring needed a repair—maybe it needed sizing—and when the dealer sent it back to her, the package got lost in the post. Lost forever. Kathryn moved on, but all these years later, I’m still indignant about this.

And then there was our friend Fabiola, who also desired emeralds for a wedding present. She may have been unsure the marriage would last (I believe it did), because the necklace she chose looked like it was meant to be cashed in. It draped over her tiny frame like a chandelier—something like the necklace below, but with at least one more tier of emeralds.

Fabiola was lovely. Her wedding gown had a fitted bodice and a full skirt of white feathers, and she floated swanlike down the aisle of the church, which was banked with flowers. My husband and I were the only guests. She didn’t need an audience—this was her fantasy wedding, starring emeralds and an adoring groom. I noted that her emeralds, though plentiful, were not as lively as Kathryn’s had been.

Much as I love the idea of an emerald engagement ring, I don’t think it would be practical. Diamonds, with their superior hardness, can be worn every day of the week, and the same goes for sapphires, which are less hard but equal to what most wearers dish out. Emeralds, though, are not for knocking around in. They’re beryls, and therefore respectably hard (7.5 to 8 on the Mohs hardness scale). But they’re brittle.

This is because emeralds almost always contain inclusions—visible spots like the ones at right. They also have fractures or fissures that make them tricky to cut. Such flaws don’t necessarily decrease the value of a stone; color is pretty much everything with emeralds. An intense blue-green or grass-green stone is highly desirable, even if it has spots in it. If an emerald has good color and no visible inclusions, it will cost a fortune.

Emeralds are often treated with oil to enhance their clarity and durability, but the treatments don’t last forever. A beautiful stone may thus be more fragile than it looks—one more reason not to put an emerald ring on your finger and leave it there while you do the housework. I can imagine buying that Victorian emerald ring on Etsy, or one like it, and swooning over the color. But I’d be nervous about wearing it.

I was about to say there’s no gem color like emerald, but that’s not true. Top quality imperial jade, left, is a similar green, semitransparent and free of inclusions. Jade is not as hard as emerald, but it’s also not as brittle, so it’s more wearable. But imperial jade is rare and quite expensive. It’s another obsession entirely, which I wrote about here.

I’ve owned any number of emeralds that I’ve given away. I’m not sure why this is; I just wound up thinking they’d look better on someone else. There was pair of gold hoop earrings with a flurry of emerald charms. Their color suited me, but I didn’t wear them, so they traveled to the jewelry box of a friend who does wear them. And then there was the Splendid Bracelet, below.

I bought it years ago from an estate jewelry dealer named Laurette. We both thought it was antique, but now I’m not so sure. It’s gold, with rose-cut diamonds and emeralds set in fine silver, which is how Georgian jewelry was made. But it’s unmarked, and according to the experts I consulted, not European. We think it’s from India, made to look European, and not particularly old. It’s a pretty, sparkly thing; the emeralds are pale but bright. But I wasn’t wearing it. So I found it a better home.

I do own one significant emerald which, true to form, I almost never wear. It’s locked away, so I don’t think to reach for it. But I love it dearly.

The stone was a gift from my husband, and the photo doesn’t do it justice. It is an intense grass green, almost clear to the naked eye. At just over two carats, it’s not huge, but it’s very fine, and it definitely speaks to me. I had it bezel-set to protect its edges, and that setting, by Reinstein/Ross, is quite opulent. That’s the thing about emeralds: they demand to be treated like royalty. They want to be worn by a pasha; they want to be the third eye of the sacred idol. They refuse to be worn casually.

I don’t exactly own this emerald. I am its custodian. It never lets me forget that. This is not the relationship I prefer to have with jewelry. But when I wear it, I put on a different life, one with only the finest things in it. I am nobility.

And then I take it off and wash the dishes.